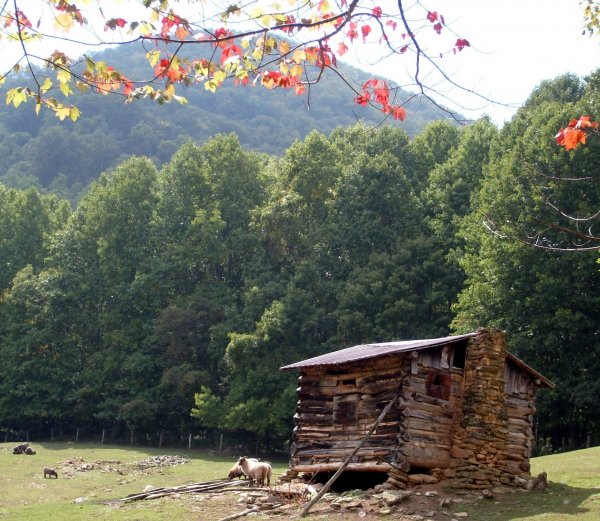 In our valley of Big Sandy Mush, history is very much alive. Our neighbors still mostly live the way their ancestors did 200 years ago. Many still cook on a wood stove and they grow and hunt their food just as in the settler’s days. In our upper pasture we have a log settler’s cabin known locally as “the Johnny cabin” since the last person to live in it was Johnny Surrett, who died about 15 years ago. We’re in the process of restoring Johnny’s cabin as a living history center so visitors can experience how mountain people have lived for centuries. Family and neighbors have shared some of their memories of Johnny: “Johnny had a little dog, and when visitors came he would put it in the metal cabinet on his porch to keep it from barking at them. There was a little hole cut out of the corner of the door for the dog to come and go. When a person entered the cabin, there was a bed to the left of the door. The table was to the right in front of the one window. I used to buy him an oil cloth tablecloth for his table once in a while. Meals consisted largely of a breakfast of coffee, eggs, onions or ramps, and potatoes. There might be biscuits and gravy, fatback, greens, or chicken stew. He pretty much lived off the land and what he could grow. His sweetener was honey. At the far end of the space was his fireplace. It was such a small space, about 9 feet by 12 feet, that he easily heated it with the fireplace and it was cozy even on the harshest days. He had a pot he used to keep clear spring water in and dipped with a dipper. His refrigerator was down from the spring, a place where he could sink an old milk can or something in the cold water to keep his perishable food cold. He never really washed his clothes; he just wore them until spring and then put them all in a pile and burned them. It was always a little dark in the cabin, because he just used an oil lamp.” “On the outside of the cabin were some nest boxes for his hens, and across the pasture was the barn where he kept his mule. He made a little money by plowing for folks with his mule. In the summer he planted the whole pasture with corn. Not wanting to waste any space, he planted right up to the door and sometimes when the corn was tall you couldn’t find the cabin.”